Like an elephant, the internet never forgets  https://www.computerworld.dk › art › 153619 › advarsel-mod-it-konkursrytter

Look who popped up on the julebanko styregruppe in Odder recently.

It’s really nice to see someone giving back to the community.  I remember the time I donated a whole load of money to good causes (not by choice), Property in Greece for use by the underprivileged, or a holiday at the MGM Grand in Las Vegas for them.  Sad thing was of course, the underprivileged then were myself and my own family.  It wasn’t a nice Christmas and will never be forgotten in the quest for justice.

Is there anyone out there affected by the latest business closure involving Ken Lynge Primby?

Fame at last, with a mention in one of Denmark’s best selling newspapers for “Konkursrytter Ken Primby”

Still awaiting my money back from this famous incident.  Meanwhile the trips to Las Vegas continue for some.

Good website this, in that it takes the information from cvr.dk and converts it into a readable format for people to understand and trace the company and the people involved.

The words konkurs, Ken and Primby are found in the same sentence.  Not for the first time.

After the unfortunate situation of his mother, Vita Holmann Storvorg‘s business Fuel Factory Aps going into konkurs and her son, Ken Primby happening to be managing director, is that Ken Primby has not been deterred from starting up a new business.

Yes, Complet Consulting Group IVS.  Taking advantage of recent new Danish rules that allow someone to set up a business with an outlay of only 1 kr, Ken is back in business.

a musical instrument of the viol family.
…

Whereas Emperor Nero fiddled while Rome burned, it seems the Managing Director of FuelFactory Aps, Ken Lynge Primby has been busily fiddling (through holidays only, of course) while the business crashed and burned.  The Parent company of FuelFactory Aps, Inovate Aps also collapsed into Tvansopløsning at the same time.

According to TripAdvisor, the former “KonkursRytter” (Computerworld.dk‘s definition, not this website’s) has..for sure..been on a few trips lately.  Berlin, London, Las Vegas…..it’s a shame no-one was watching FuelFactory Aps better, just like Connect Resorce Agency back in 2007 and other businesses before that.

A new website seems to have recently appeared for FuelFactory Aps.  First thing to observe about this site is that it illegally fails to display the CVR Number of the business.  I hope they fix that soon, because the website has no specific names behind it, not least that of the registered owner of FuelFactory – Vita Holman Storborg.

Luckily, Linkedin has some useful information on who might be operating the day to day activities of the business.

But wait, who is that?  Ken Lynge Primby?  Back in business as an IT Consultant and even identifying himself as managing director of an IT company called FuelFactory Aps in Tvangsopløsning?  Again…?

Poor Vita Holman Storborg, mother of Ken Primby.  Trying out as an IT Consultant at the age of 70 as described here was always going to be a tough move.  A whole new career change was bound to be tough for anyone, but for a life dealing with karma, perhaps the logic of being an IT consultant was too much for her declining days.

A review of the Fuel Factory accounts showed the official business of the company to be zero.  Like   Connect Resource Agency back in 2007, however there is a common link in both companies – The accounts highlight Ken Lynge Primby as Dirigent of Fuel Factory, exactly the same as his role as revisor and liquidator of Connect Resorce Agency back in 2007.

Some might wonder who will be the liquidator of Fuel Factory…?   Let us see as time goes by… 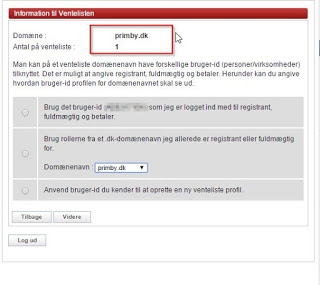 In this time, online presence is an important thing.  In the same way that kids might some day regret those posts on facebook that show them making mistakes, someone with a serious point to make in their career and working life would do well to to be courteous, fair and above all, scrupulous.

If you didn’t manage that, then you could well imagine that your business indiscretions would no longer be private, but would be forever available for the world to see and no amount of appeals to google to hide it would work.  How embarassing and financially damaging would it be to be, say for example, Ken Lynge Primby, the “recruitment agent” mentioned in this story here about the Bankruptcy Rat?  Yes, the “IT Bankruptcy Rat”, a literal translation from Danish by a respected IT publication.

Imagine then if that man forgot, or otherwise failed (maybe due to other financial commitments?) to renew important domain names such as connect.dk (which got listed prior to it dropping for 400,000 krone, wonder why it didn’t sell?) and primby.dk, the man’s own surname.  Why, it’d be a very dangerous mistake to make, wouldn’t it?

Fast forward 2 years and primby.dk got registered after dropping by one of the people who he still owes a debt to.  I suppose a desperate man might get worried and spot that :-

b) Maybe wanted to move on with his life, if only he was finally paid the money he was still owed and could forget it all, healing the psychological damage done to him, his young children and partner.

Sigh, it never happened.  I’d imagine, hypothetically though, that such a man might spot the domain hadn’t been renewed and was on the verge of dropping and might try and reclaim it by paying 75 kr to get on the dk-hostmaster “ventelist” (waiting list, to those wondering…) and nab it when it was free again.

Well, if not him, somebody did anyway.

And that’s what prompted me to renew it….