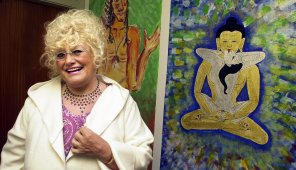 At the age of 70, after a lifetime of astrology, karma and alternative healing,
she’s decided to venture into the world of Information technology and
recently became director of no less than two new companies based in
Odder – inovate holding aps and fuel factory aps.
The latter is registered on cvr.dk as an information technology
consultancy, so a career change – that’s a really impressive step to
take, Vita, so well done! According to cvr.dk, her registered address is in Grenaa, as is vaeksthøjskole.
Well, the website says she founded that one and works there so she
faces quite a commute, considering the registered address of both her
new companies is Skovdalsvej 4, 8300 Odder.  Which according to other
internet sources is where her son, Ken Primby, lives.

Yes, son.  The same son who bought fuelfactory.dk about the time the company was set up by his mother.

I write only facts here, so of course, I have no reason to suspect
anything underhand is afoot.  I am sure that Vita is going to operate as
a director in a legitimate and legal manner and that her son, Ken Lynge Primby is too.  In fact, maybe he’s just helping his mother by buying her fuelfactory.dk.

According to cvr.dk, Vita Holman Storborg has been director of 2 other companies : holman and nørby a/s and HUAMAO ACUPUNCTURE CENTER ApS – both of which ended in tvangsopløsning.  Coincidentally, Ken was also a director of Holman and Nørby at that time.  Karma.

All this information is freely available on the internet if any of it is incorrect, then I am happy to change it if contacted.